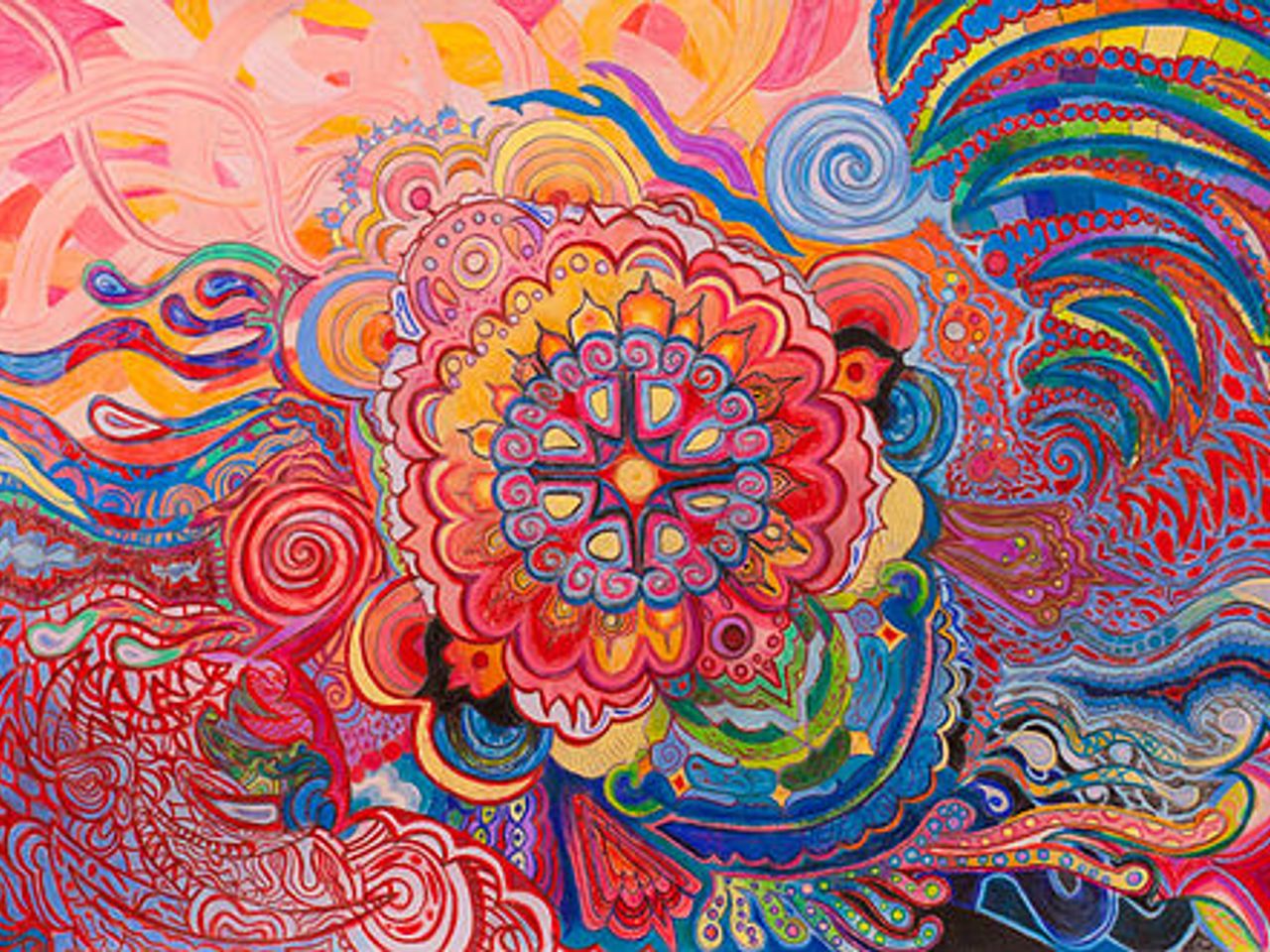 Psychedelic research began in the late 19th century and early 20th century, with scientists identifying and classifying types of psychedelic plants and mushrooms, as well as synthesizing psychedelic compounds such as MDMA, DMT, mescaline, and LSD.

Research on psychedelics began to take off in the 1950s and 60s. Scientists conducted thousands of studies on LSD, examining its potential as a tool for psychotherapy and as a means for tackling alcoholism and addiction.

But in the late 60s, the US government was increasing its efforts in its war on drugs. By the time 1970 rolled around, then-president Richard Nixon introduced the Controlled Substances Act, making all the psychedelic compounds used in psychedelic research illegal. All government-sanctioned research pretty much ended.


#1. Research on DMT’s Effect on the Brain

Between 1990 and 1995, researcher Rick Strassman led a US government-approved study on the effects of DMT on human participants.

This was the first legal study into the effects of a psychedelic on humans in 20 years. Strassman’s study on DMT is, therefore, seen as kicking off the psychedelic renaissance.

Strassman administered approximately 400 doses of DMT to nearly five dozen men and women. Based on his research, he called DMT the ‘spirit molecule’. Strassman reached this conclusion based on how reliably his participants reported mystical-like experiences, which included visions, powerful emotions, out-of-body experiences, contact with strange entities[*].

The results of his research were described and discussed in his book DMT: The Spirit Molecule (2001).


#2. The Long-Term Benefits of Ayahuasca

In 1996, Dennis McKenna and Charles Grob published a study into the potential long-term benefits of ayahuasca[*].

The researchers recruited two groups of participants from Manaus, a city in the Brazilian Amazon. The first was made up of 15 members of the União de Vegetal (Union of the Plants, or UDV), a syncretic religious movement founded in Brazil, based on the ritual use of ayahuasca. The second group was a control, made up of people with no prior use of ayahuasca.

The study showed that ayahuasca use among UDV members resulted in positive, lasting personality changes.

This included increases in traits like orderliness, emotional maturity, frugality, loyalty, tranquillity, fewer inhibitions, more optimism, and more outgoingness. Also, some UDV members struggled with alcohol, depression, or alcohol abuse before joining the church. But since joining, these issues disappeared.


#3. How LSD and Psilocybin Achieve Their Effects

In 1998, Franz Vollenweider from the University of Zurich published research showing that LSD and psilocybin achieve their effects by binding to the 5-HT2A receptor in the brain[*].

Vollenweider and his team demonstrated that psychedelic effects rely on the 5-HT2A receptor because they also gave participants a drug called ketanserin along with LSD or psilocybin, which blocks this specific serotonin receptor. When this happens, hallucinogenic effects from LSD or psilocybin do not occur.


#4. Research on How Psilocybin Leads to Highly Meaningful Experiences

In 2006, Roland Griffiths published a landmark study showing that psilocybin can induce mystical experiences that are highly meaningful for people and continue to have personal significance in the long-term[*]. Many participants reported that their experience with psilocybin in the study was among the five most meaningful and spiritual experiences of their lives.

The mystical aspects of the psilocybin experience included sacredness, intuitive knowledge, the transcendence of time and space, deeply felt positive mood, and ineffability (the inability to describe the experience).


#5. Psychedelic Research on the Effect of Psilocybin on Anxiety in Cancer Patients

In 2011, Grob published research showing that psilocybin was effective at reducing anxiety in patients with advanced-stage cancer[*]. Moreover, lowered anxiety and improvements in mood were sustained some months after the trial. This was a pilot study, but it was important as it laid the groundwork for future studies into how psychedelics can help treat end-of-life anxiety.

End-of-life anxiety is very common among patients with terminal illnesses, yet many find that conventional treatments don’t help. Many such patients find that a psilocybin experience helps them come to terms with their illness and their own mortality.


#6. Psychedelic Research Shows MDMA May Be Effective in Treating PTSD

Also in 2011, the researcher Michael Mithoefer published a study demonstrating that MDMA is both safe and effective in the treatment of post-traumatic stress disorder (PTSD)[*]. PTSD is a type of mental health disorder in which a trauma results in symptoms such as flashbacks, nightmares, anxiety, and difficulties sleeping. The trauma may include past abuse or distressing events in adulthood, such as fighting in a war or witnessing terrible incidents.

For many people with PTSD, the condition is treatment-resistant, meaning that no treatments offer substantial relief. Mithoefer’s study, however, showed that MDMA (known for being used recreationally) could be used as an effective tool in therapy for people living with PTSD. The compound led to significant reductions in anxiety and fear, allowing participants to explore their trauma in therapy with greater ease. This led to improved mental health outcomes.

In 2014, Robin Carhart-Harris from Imperial College London published a study describing how psilocybin increases communication between areas of the brain that don’t normally communicate with each other[*].

Carhart-Harris and other researchers stated that these changes in the brain likely happen due to psilocybin binding to 5-HT2A receptors. They also speculated that this increase in communication between brain regions may help to explain certain experiences like synesthesia (in which one sense is perceived by another sense, so ‘hearing colors’ or ‘seeing sounds’).


#8. Psychedelic Research Reveals Images of the Brain on LSD

In 2016, Carhart-Harris and fellow researchers from Imperial College London published the world’s very first images of the brain on LSD. This brain imaging study revealed why certain effects of LSD occur.

The researchers found that LSD disables a part of the brain known as the default mode network (DMN). This is a collection of key brain hubs that work together to limit the amount of information reaching our conscious awareness. The DMN has also been referred to as the neural basis of the ‘ego’. By disabling the DMN, LSD increases communication between areas of the brain that are normally quite segregated. This was what Carhart-Harris discovered previously with psilocybin. The researchers of the 2016 study note how the effect of LSD on the DMN helps to explain certain aspects of the LSD experience, particularly ‘ego dissolution’ and the feeling of unity and oneness.

Carhart-Harris and researchers show in a 2017 study that two doses of psilocybin can quickly alleviate treatment-resistant depression[*]. Also, significant improvements in mental health were observed for up to six months following the experiment. The researchers noted that psilocybin basically ‘reset’ the brains of depressed participants.

No patients sought antidepressants for five weeks following treatment with psilocybin. The researchers also highlight that the antidepressant effects of psilocybin depend on the quality of the experience.


#10. Research Suggesting That Ayahuasca May Have Antidepressant Effects

A 2018 study by researchers from Brazil demonstrates that ayahuasca has rapid antidepressant effects[*].

This occurred for patients who had treatment-resistant depression, so they had tried other forms of treatment, but only ayahuasca helped them recover from their depression. The researchers also described how ayahuasca reduces the activity of the DMN, which is known to be hyperactive in patients with depression.


#11. Psychedelic Research Reveals Images of the Brain on DMT

In 2019, Chris Timmerman and other researchers from Imperial College London publish the results from the world’s first-ever brain imaging study on DMT[*]. Using EEG, a technique that measures the electrical activity of the brain, the researchers show that DMT reduces brain waves associated with waking consciousness while increasing brain waves normally correlated with dreaming.

In response to these results, the researchers said that participants were in a sort of waking dream state. The effect of DMT on brain waves helps to explain how users become detached from external reality yet fully immersed in another world.

Building on the work of psychedelic researchers in the 50s and 60s, scientists have used more refined scientific methods to show how psychedelics affect the body, the brain, conscious experiences, the sense of self, and mental health (in both the short- and long-term).

Psychedelic research is on the rise like never before. Each year we are seeing a further discovery that sheds light on how psychedelics work and how these interesting compounds can help improve our lives. It’s exciting to see what the latest psychedelic research will reveal next.