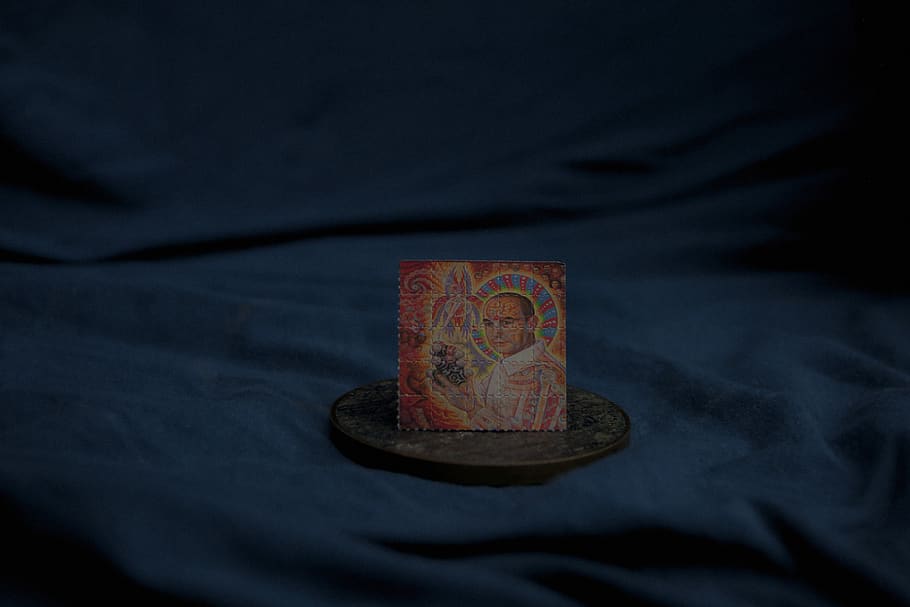 Microdosing psychedelics is the practice of taking a very small dose of a psychedelic to achieve a specific effect.

Psychedelics that people usually use for microdosing include LSD, psilocybin mushrooms, DMT, or ‘research chemicals’ like 1P-LSD (which is nearly identical to LSD).

People are drawn to microdosing for its supposed mental health benefits, as well as the potential to improve focus, creativity, and productivity.

This article will investigate the ins and outs of microdosing psychedelics, including what ‘microdosing’ means exactly, why people decide to microdose, and what the latest scientific research is revealing about this new and popular way of taking psychedelics.

The Basics of Microdosing Psychedelics

What is a Microdose of Psychedelics?

The microdose that is right for you can take a certain amount of trial and error. If you’re sensitive to psychedelics, then you may find that an optimal microdose for someone else may produce noticeable psychoactive effects for you.

It can be difficult to make a clear distinction between a microdose and a psychedelic dose (when psychedelic effects occur). Here are a few things to watch out for when deciding on the correct dosage for you:

How Often Should You Microdose a Psychedelic?

In The Psychedelic Explorer’s Guide (2011), the researcher Dr. James Fadiman laid out a protocol for microdosing psychedelics, which many users follow. It involves leaving a gap of 3-4 days between each microdosing session.

Some users, however, may differ in how often they microdose. Leaving a gap of two days between each microdose is common, too.

While Fadiman recommends microdosing twice per week for 10 weeks, some users might microdose for less time or longer.

The types of psychedelics (and related doses) that people normally use when microdosing include:

These substances are common for microdosing because they are some of the most well-known psychedelics (except 1P-LSD), making them relatively accessible. Also, they are easy to dose. For mushrooms, DMT, and MDMA you just need scales, while for LSD and 1P-LSD, you can take a 100mcg tab, place it in 100ml of liquid (distilled water and/or vodka), which means that 1ml of liquid will equal 1mcg of LSD.

People microdose for a range of reasons, with the most common including:

When it comes to microdosing for mental health, there are different reasons you might decide to take this route.

In terms of the research on microdosing for depression, the evidence is still limited. But, based on many anecdotal reports, some people with depression find microdosing psychedelics is an effective way of alleviating symptoms.

The journalist Erica Avery found microdosing LSD help to lift her out of a depression[*], as did the writer Ayelet Waldeman, which she recounts in her book A Really Good Day: How Microdosing Made a Mega Difference in My Mood, My Marriage, and My Life (2017).

In another article, however, Avery found her depression returned when she stopped microdosing. She also discovered that taking larger doses of psychedelics, with long intervals in between, was more beneficial to her well-being[*].

For Waldeman, her depression didn’t come back when she stopped microdosing. All of this goes to show that the mental health effects of microdosing can vary depending on you as an individual.

As mentioned, microdosing psychedelics may help to improve your focus, concentration, emotional sensitivity, energy, and creativity.

These improvements can benefit you at work, in various sports, in your hobbies, in your social interactions and relationships, and in your everyday activities and tasks.

Many users report major improvements in their life as a result of microdosing psychedelics. But because it is a relatively new practice, the amount of rigorous scientific research on microdosing is limited.

That being said, there are some interesting studies that help to clarify the effects of microdosing and the specific benefits involved.

#1. Microdosing Psychedelics Appears to Be More Than Just Placebo

Given that a microdose involves such tiny amounts of a compound, researchers have wondered whether any reported effects of microdosing come down to just the placebo effect.

The placebo effect is when you believe taking a drug will benefit you and this belief leads to a beneficial effect. It’s not the drug itself that causes this change (since the dose is too small) but the expectations involved.

However, researchers can tell whether the drug itself has a therapeutic effect by comparing its effects with those of an inactive substance (e.g. a sugar pill). These kinds of studies are known as placebo-controlled trials. In 2019, researchers carried out such a trial on microdosing[*]. The study, published in Biological Psychiatry, was also double-blind, meaning neither the participants nor the researchers knew who was receiving LSD or the placebo. This helps to make the study even more rigorous.

This study found that LSD produced dose-related effects at 6.5, 13, and 26mcg. Dose-related here means that the effects of the drug change when the dose changes. The subjective effects included increases in feelings of vigor and anxiety, not a reduction in anxiety, which many users report.

Researchers also note participants who took LSD experienced worsened creativity, while those who took the highest dose rated positive images less positively. In addition, microdoses of LSD produced no improvements in tests related to cognition. These were surprising findings.

One of the study’s authors, Harriet de Wit, said that the benefits of microdosing may arise after repeated sessions[*], like when you follow Fadiman’s protocol. The study didn’t look at microdosing in this context. Also, this was a study involving healthy volunteers. The authors suggest microdosing may lead to improvements in mood and cognition for those with depression.

One last thing to highlight about this study is that most guides on psychedelics state 26mcg would be more like a low dose of LSD, not a microdose[*].

Fadiman published a study in 2019 suggesting that microdosing psychedelics like LSD and psilocybin on a regular basis can lead to improved mood, less depression, and higher levels of productivity[*].

This was not a double-blind, placebo-controlled study like the one we just discussed. In this study, researchers collected reports from more than 1,000 people in 59 countries. Most of these participants microdosed LSD or psilocybin mushrooms every three days for a month. The results indicated that most people benefited from microdosing, with improvements in mental health, productivity, focus, energy, work, relationships, and health habits. Participants reported feeling these benefits without noticing they had taken anything.

The researchers say, though, we should be careful about drawing any firm conclusions based on this study, since it relies on self-reports. Moreover, the authors realize the positive results could be based on the placebo effect. Fadiman adds that “people whose major symptom is anxiety should not microdose”[*]. As we saw in the study published in Biological Psychiatry, microdosing can increase anxiety levels.

Despite these caveats, many participants in the study told the researchers that they felt microdosing LSD or psilocybin to be an effective antidepressant. Some had even given up antidepressants in favor of microdosing.

#3. Microdosing DMT May Be an Effective Antidepressant

Another study published in 2019 discovered that microdoses of DMT lead to improvements in depression and anxiety in rodents[*]. Researchers gave rodents these microdoses over a period of seven weeks and with a two-day gap in between each dosing session, which is how many people normally microdose.

The researchers found that microdoses of DMT improved measures of anxiety and depression, without impacting cognition or social interaction. However, unlike many people’s reports of microdosing, very small amounts of DMT did not lead to improvements in cognition or sociability among the rodents.

It’s important to emphasize that this is a study involving microdosing and rodents, not humans. We will need more research to see if microdosing DMT leads to similar mental health benefits in people.

Microdosing Psychedelics May Be Beneficial, But More Research is Needed

However, the Beckley Foundation is currently carrying out a number of placebo-controlled studies on microdosing[*]. It’s an area of research that is attracting attention from many scientists in the field.

While we need more research to understand the true benefits of microdosing psychedelics, most people who regularly do it find it helpful in different ways. Also, compared to higher doses of psychedelics, it seems to pose fewer risks. After all, you can’t really have a ‘bad trip’ when you take such a low dose of a psychedelic. At the same time, we don’t know what the long-term effects of microdosing are, so this is something to keep in mind.