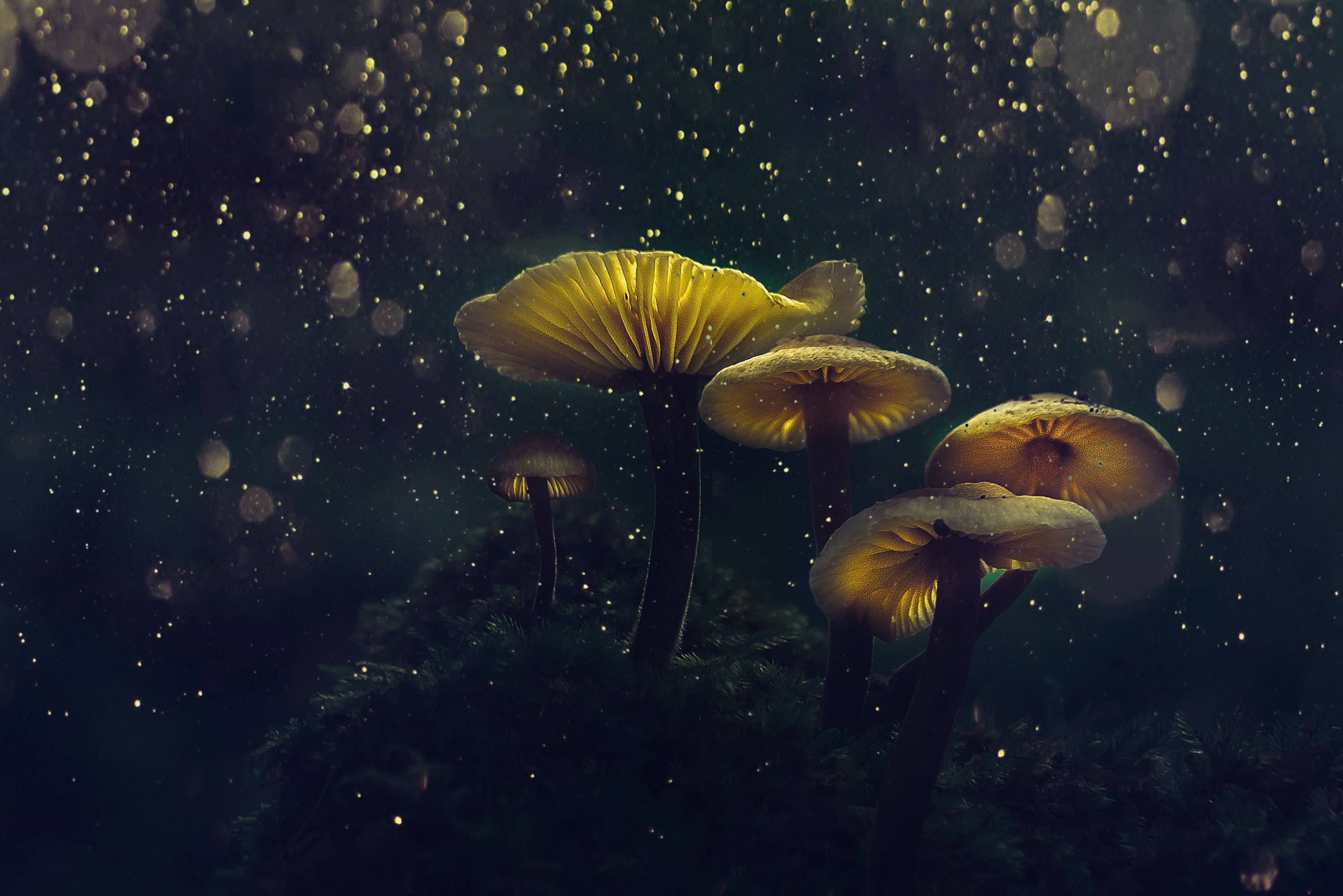 Psychedelic mushrooms include many different species of mushrooms, but what they have in common is that they contain the psychedelic compound psilocybin. This is why they are often referred to as psilocybin mushrooms.

The Western discovery of psilocybin mushrooms sparked scientific interest in them, which continues to this day. We are, after all, in the midst of what is being called a ‘psychedelic renaissance’, with ample research being carried out on psilocybin, the main psychedelic compound in psychedelic mushrooms. The popularity of mushroom retreats has also been increasing as participants seek the therapeutic benefits of a safe, guided psilocybin therapy session

But despite increasing scientific and public interest in psychedelic mushrooms, these fungi still remain illegal in most countries around the world.

What Are Psychedelic “Magic” Mushrooms?

Psychedelic mushrooms are ‘psychedelic’ because they contain the psychedelic compound psilocybin. However, it should be noted that psilocybin is actually inactive[*].

Ingesting psilocybin leads to psychedelic effects because psilocybin converts in the body into psilocin, which is an active compound. Psychedelic mushrooms contain both psilocybin and psilocin, in differing amounts, both in the same species and between different species.

It’s important to be aware of these features. As the mycologist Paul Stamets highlights in his book Psilocybin Mushrooms of the World (1996), many psychedelic mushrooms have deadly lookalikes. An example of this is how Psilocybe cyanescens (the first image below) has a similar appearance to the deadly mushroom Galerina marginata (as shown in the following image).

Some species are stronger than others, in that they contain higher concentrations of psilocybin and psilocin.

Psilocybe azurascens are widely considered to be the most potent species of psychedelic mushroom. It contains an average of 1.78% psilocybin. For comparison, Psilocybe cubensis contains 0.63% psilocybin[*].

The greatest variety of psilocybin mushrooms can be found in Mexico; however, psychedelic mushrooms also grow throughout:

Both psilocybin and psilocin are psychedelic tryptamines, a group of psychedelic chemicals that also includes DMT, 5-MeO-DMT, and ibogaine. Tryptamines have a distinctive chemical structure (they are structurally similar to the brain chemical serotonin).

But, like the other types of psychedelic chemicals – phenethylamines (e.g. mescaline) and ergolines (e.g. LSD) – psilocybin and psilocin achieve psychedelic effects by stimulating the 5HT2A brain receptors, a type of serotonin receptor.

The History of Psilocybin Mushrooms

Psychedelic mushrooms have a rich cultural history spanning millennia. The earliest evidence of humans using psychedelics involves psilocybin mushrooms. In a cave in the Tassili-N-Ajjer region of the Sahara Desert in Algeria, we find a mural painting of a bee-headed man with mushrooms sprouting out of his body[*]. These mushrooms have been identified as Psilocybe maireri, which are native to the region. The mural painting is 7,000 to 9,000 years old.

Another piece of evidence of early mushroom use is the Selva Pascuala cave mural near Villar del Humo in Spain[*]. This cave painting depicts mushrooms that researchers believe belong to the species Psilocybe hispanica, a mushroom that can be found in that region. This mural painting is 6,000 years old.

We also find evidence of mushroom use in pre-Columbian societies. For example, ‘mushroom stones’ have been discovered in Mexico and Guatemala, dating to 1,000-1,500 BC[*]. Experts consider these signs of ‘mushroom cults’ in Mesoamerica.

We know that the ancient Maya consumed what they referred to as k’aizalaj Okox (identified as Psilocybe cubensis)[*]. The later Aztec people called the psychedelic mushrooms they consumed teonanácatl, a word in the Aztec Nahuatl language meaning “divine mushroom” or “mushroom of the gods”. These mushrooms included Psilocybe mexicana and other species belonging to the Psilocybe genus[*].

The first written account of psychedelic mushroom use comes from the Florentine Codex (1560), a research study of Aztec culture, carried out by Fray Bernardino de Sahagún, a Spanish missionary priest.[*] He noted that the Aztecs would eat mushrooms with honey and drink chocolate throughout the night. The friar described that those under the influence would dance and cry.

Western interest in psychedelic mushrooms was kickstarted by R. Gordon Wasson, a banker who took part in an indigenous mushroom ceremony in Oaxaca, Mexico, in 1955[*]. Wasson described his experiences in an article for Life magazine, published in 1957. Then, in 1958, Swiss chemist Albert Hofmann (who first synthesized LSD), isolated and identified the compounds psilocybin and psilocin from Psilocybe mexicana[*].

How Psychedelic Mushrooms Are Commonly Used

Psychedelic mushrooms can be used in many different contexts. Let’s explore some of the most common uses of psilocybin mushrooms.

As we have seen already, psychedelic mushrooms have been used in a ceremonial context. The Mayans and Aztecs viewed these mushrooms as sacraments.

Such mushroom use continues until this present day in Mexico in the form of Mazatec shamanism. Mazatec shamans, such as Maria Sabina who guided Wasson’s mushroom journey, ritually use psychedelic mushrooms for healing purposes. The Mazatec people live in the Sierra Mazateca, a mountainous region in Oaxaca, Mexico.

Many people decide to take psychedelic mushrooms on their own, for personal, therapeutic, or spiritual purposes. Someone might wish to have a sober trip sitter with them as a form of support and for grounding if needed.

One way of taking psychedelic mushrooms that have risen in popularity recently is in the form of microdosing. This involves taking one-tenth of the standard dose of mushrooms, which would be around 0.1-0.5g, although this may vary depending on the species in question. This is also known as a sub-perceptual dose, as psychedelic effects do not occur[*]. At this sort of dosage, people may report slight but noticeable changes in focus, mood, creativity, and cognition.

The Effects of Psilocybin Mushrooms

Psychedelic mushrooms can cause a range of physical, emotional, perceptual, cognitive, and spiritual effects. Let’s take a look at these sorts of effects in turn.

In some countries, the possession of psilocybin mushrooms is decriminalized, including in Austria, Croatia, Cyprus, Czech Republic, Italy, Portugal, Spain, and in Denver, Colorado, and Oakland, California in the US[*].

For the large majority of countries, however, psychedelic mushrooms – despite growing naturally – are illegal to possess. In the UK and US, for example, psilocybin mushrooms are highly illegal. In the UK, they are a Class A drug, meaning it is of the most harmful and addictive kind. Likewise, in the US, psychedelic mushrooms are a Schedule I drug, which means they have a high potential for abuse and no recognized medical value.

Despite the Law, Psychedelic Mushrooms Are Widely Considered Safe and May Have Therapeutic Benefits

Research has shown that psilocybin may be safe and effective at treating a range of mental health conditions, such as depression. The lethal dose of psilocybin is so high that, as far as the records show, no one has been able to consume the weight of psychedelic mushrooms necessary to reach such a dose.

In the normal range of doses, psilocybin has no toxicity. It also carries a low abuse risk and does not result in physical dependence[*]. In fact, psilocybin mushrooms often help people give up their addictions, such as smoking or drug addictions.

Research on psilocybin is continuing. So far, the results of psychedelic research have shown that psychedelic mushrooms have the potential to treat a wide range of conditions, with rapid and long-lasting effects.