There is no "right" asana

When Benjamin Sears attended his first yoga teacher training, he admits he imagined that he’d walk out a bonafide Yoga Master.

Anyone who has taken a teacher training, or even attended a retreat, knows well the deeply humbling experience that has become the hallmark of such a transformative process: oh, you think so?

Coming from a blessed life of suits, parties, growing up in a family with a private villa in the South of France, the step for Benjamin into the life of a teacher might not seem the most logical. But it might be that transition exactly that positioned him so perfectly to understand a deeper level of yoga -- a level he now shares with the visitors to that same private villa in the South of France, outfitted as a boutique hotel and retreat center.

There’s more to yoga than how it looks.

“People are looking for aesthetic watermarks in their practice rather than feelings,” he says. Coming from someone who was deeply embedded in SOHO’s high society, this observation runs deep and reflects a criticism that many aim at Westernized yoga.

“It's less about how does your back look, it's more about are your body parts in the right place relative to each other, are you maximizing your individual potential in the moment? Where are you feeling it? Is that where it makes sense to feel it in this pose? If so then the final picture is ideal and therapeutic for you at his point in your development. ”

For the Western mind, such an approach can be challenging. Many yogis come to the practice seeking to achieve -- a certain pinnacle pose, or a state of no-mind meditation, or to heal some sort of physical injury. As a result, yogis become hyper-focused on the external geometry of the pose: does it look like the guy in the book, or the teacher at the front of the room? Anatomical alignment has become king in a culture that loves to dissect the workings of each asana. While the asana practice can definitely offer much of in the way of supporting physical healing, Sears says, taking a feeling approach rather than an aesthetic approach can open the door to a much more transformative shift in perspective.

“Using sense memory to continue to improve in practice connects to using yoga to recalibrate one's life view, because it's less about "did I get this” this time and more about "how did I go about it and will that operating mode serve me next time?" Then the thing becomes a whole - if yoga is really a way of giving us the opportunity to shift the way that we respond to the fluctuations of life, then the poses themselves have to be an ongoing recalibration - a new experience guided by past experience and the roadmap of universal form.”

Which means? There isn’t a “right” or “perfect” way, but instead a continual unfolding and adjusting as the body and spirit shift. And that’s uncomfortable for a linear society to accept.

It also means that there is space for a spiritual deepening to occur as the practitioner focuses on feeling into the posture creates a pathway to spiritual opening. “Sometimes people try to jump to the esoteric too fast - like ‘yoga is spiritual, so it's not about the poses’. What's sacred is the quality of attention that you pay to the way you are doing the poses. And then the esoteric elements can find you.”

Release the rigid attachment to the aesthetic of the virasana, and you might just find that what you’re feeling runs much deeper than a hip opener. Benjamin himself realized the ways yoga was impacting his self-awareness when he was blindsided over smoothies:

“I remember standing in my loft in SOHO with my first ever yoga girlfriend who taught me how to sprout an almond and make a smoothie, and we're standing there drinking a sprouted free-range goji organic smoothie thing. I'm looking down the street and thinking, ‘Holy shit maybe one day I'll be a nice person’. I distinctly remember having this thought. Where did that come from? Was I doing a lot of self-reflection? Was I sitting down and thinking about how I could make myself better at being me? No! I was just doing a lot of the Bikram practice, and I was doing this intense, almost enforced self-reflection in the crucible of the class where everything is reflected back to you in a very hyperbolic way because of the intensity of the class. And it led me to this beginning, this seed, this sankalpa of decency... It sort of gave me an interest in self-reflection, and I think the physical in hatha yoga leads us to the potential for self-awareness through the lens of the physical body.

This is why the archetypal forms are so important: they provide a metaphorical scaffold for our self-reflection. ”

For many yogis like Benjamin, the real transformative magic of the yoga practice starts in the body -- like his herniated disks -- and then works its way inward, subtly realigning the world perspective once the ego’s attachment to achieving only the most impressive poses subsides. “You never step in the same river twice. It's one of the beauties of doing a practice where you get to do a second set of a pose, you get to shift your technique second round, which is the essence of practice: raising your skill so you do the same thing more effectively” says Benjamin. Then rather than watch and compare ourselves to others’ practices, we can be more focused on turning inward:

Can I feel my healing happening? Can I feel into my breath? And how did I move through that moment?

“That's ultimately one of the powers of yoga - to train us to pay attention in a non-habitual way – to be present. Just like the pose is a constant exploration of territory, that's what life is. I don't know if anyone’s enlightened. Everybody's just doing the work... or trying to.” 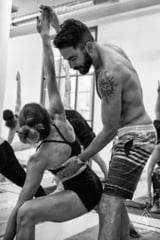 Benjamin Sears is the founder of Lux Yoga, a gorgeous yoga retreat destination in the South of France. "I signed up for my first teacher training under the comical impression that I’d be a yoga master by the end of the curriculum. Little did I know that I was to effectively graduate from yoga kindergarten. Nonetheless, I had hatched an vision of a yoga retreat that was to hasten the arc of my development as a teacher and become my life’s work. As I transitioned from a life of suits, meetings, drinks and parties towards introspection and self-betterment, I never lost my joie de vivre, my love of life..." Visit Benjamin's Profile or his website here.

Preparing for Ayahuasca: Everything you need to know