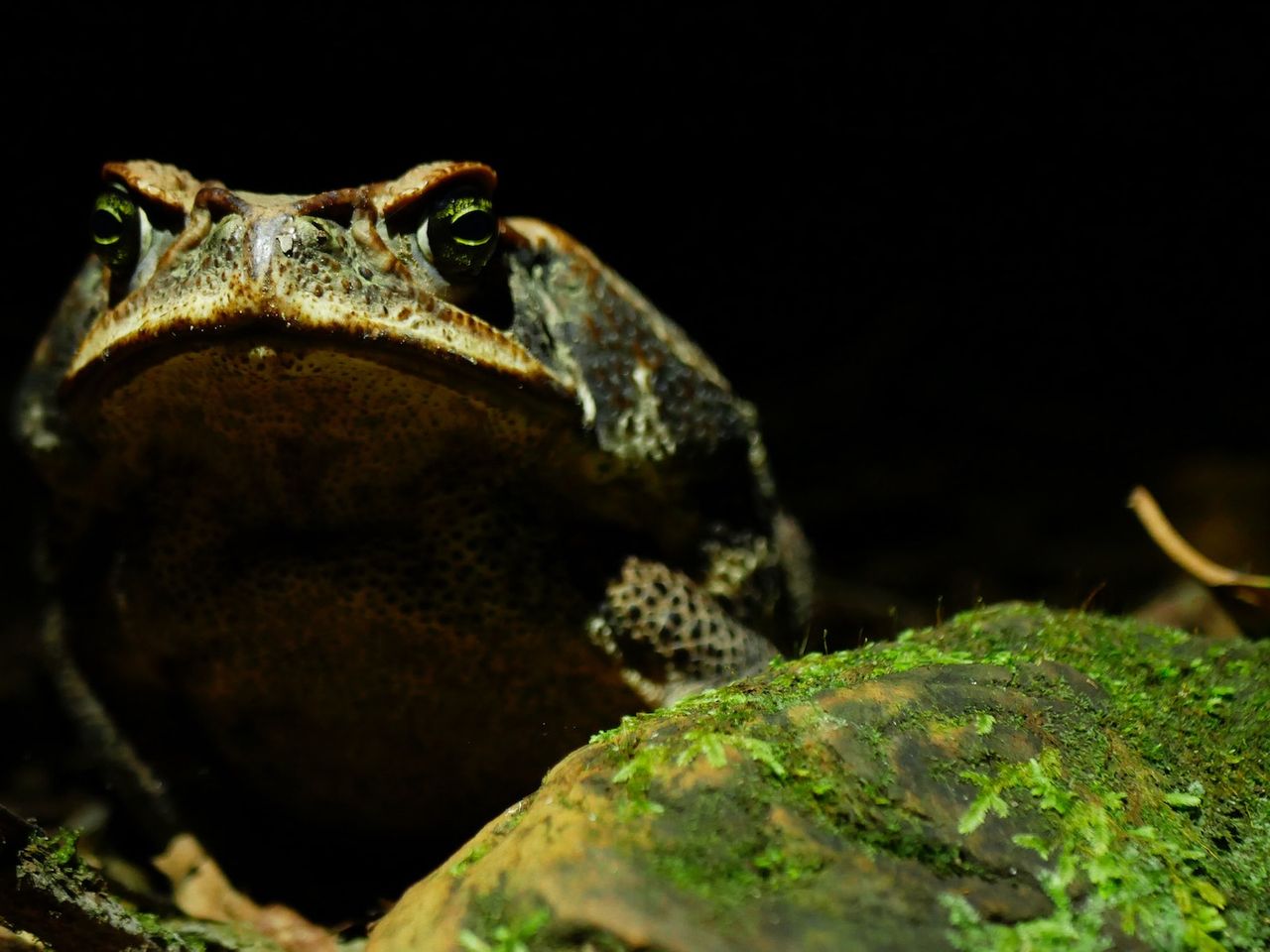 Kambo, also known as “frog medicine” or “sapo”, is the venom secreted by Phyllomedusa bicolor (the giant leaf or the giant monkey frog), a bright green frog that's native to the rainforest regions of several South American countries including Brazil, Peru, Colombia, Venezuela, Bolivia, and the Guianas.

As the giant monkey frog comes out at night to feed, it's their distinguishing "song" that indigenous tribes like The Matsés follow to track them down. Once captured, locals carefully and respectfully tie them and suspend them by all fours to provoke secretion of the venom. After quickly scraping the waxy venom off this Amazonian Tree Frog's back and legs, they release it back into the wild unharmed. This frog secretion is then dried and stored where it keeps for over a year.

Widely sought after by indigenous tribes for its purifying effects on both the mind and body, kambo exhibits strong purgative effects when applied via burns on the skin. Known as gates, these burns provide a path to the lymphatic system, where kambo quickly gets to work on the individual.

Like many medicines from the Amazon rainforest, taking kambo is not for the faint of heart. Kambo induces an intense physical purge, and depending on the individual; the short-lived effects can be very unpleasant.

What is a Kambo Ritual or Ceremony?
The Effects of Kambo
The Benefits of Kambo
Is Kambo a Psychedelic?
Is Kambo Illegal?
Kambo Safety and Side Effects
How To Prepare for a Kambo Ceremony
How Much Does Kambo Treatment Cost?

What is a Kambo Ritual or Ceremony?

Western science doesn't fully understand the mechanisms of action of kambo that causes its effects on the body. But dozens of bioactive peptides contained within the frog venom bind to human cell receptors and stimulate the production of hormones and neurotransmitters. Some are vasodilators that increase permeability across the blood-brain barrier, while others regulate dopamine, serotonin, and a host of neurotransmitters within the brain related to mental health.

Other kambo peptides interact with the pituitary gland-adrenal axis and help mediate stress, anxiety, and depression.

The Effects of Kambo

The effects of kambo are thought to be dependent on where you were born and your life experiences.

Indigenous peoples commonly use kambo to boost fertility, cleanse the body and soul, and to increase both strength and endurance on hunts. Many even claim that the detoxifying effects of kambo mean it temporarily inhibits human scent, thus enabling them to close-in on prey more effectively. Very little, if any purging occurs in indigenous people.

Those born and conditioned outside of indigenous environments often experience very different effects, including:

Physical purging soon ensues—both vomiting and sometimes defecation—and like a mini Krakatoa of sorts, toxins are expelled from deep within the body.

The effects usually last from 30-40 minutes, the first half of which is generally more intense. Swelling is particularly common where an inflamed throat, swollen lips and mouth, often give rise to something known as "frog face."

When the effects of the medicine wear off, people report a wide range of effects. While some experience extreme alertness and vitality, others may feel worse for wear and want to do nothing more than lie down and sleep.

Whatever the immediate effects, most people eventually come to notice real benefits in the days following a kambo ceremony, where elevated mood, increased clarity and focus, and feelings of vitality are commonplace.

The Benefits of Kambo

Among native indigenous populations in the Amazon, the shamanic use of kambo targets conditions such as malaria, fertility, fevers, and snake bites, in addition to cleansing and detoxing the body and spirit.

Outside of the jungle, westerners have found kambo medicine to be efficacious for a wide variety of conditions. Many proponents claim the medicine can support ailments such as:

Several published studies support much of the reported subjective benefits.

Much of the scientific knowledge we have in the west is due to Italian scientist Vittorio Erspamer. He spent much of his career studying peptides like dermaseptin, dermorphin, and deltorphin. In 1986, he claimed that kambo has a "fantastic chemical cocktail with potential medical applications, unequaled by any other amphibian[*]."

Kambo can cross the blood-brain barrier with relative ease, something that many other forms of medicine, natural or pharmaceutical, cannot. This unique ability enables it to reach much deeper into the body.

A study at the University of Paris in 2012 found the peptide Dermaseptin B2 found in kambo to be effective at killing certain types of cancer cells. Researchers demonstrated that "Drs B2 inhibits the proliferation and colony formation of various human tumor cell types, and the proliferation and capillary formation of endothelial cells in vitro[*]."

Kambo is also one of the most potent natural anti-inflammatory, antibiotic, antimicrobial, and anesthetic substances found in nature, as it's thought to strengthen the immune system and detoxes both the liver and the GI tract.

Is Kambo a Psychedelic?

While none of the peptides present in the frog venom are known to produce a traditional psychedelic trip, the use of psychedelic substances such as rapé or sananga in conjunction with kambo may provoke a mild and transient psychedelic effect.

Kambo use has not yet gained the popularity of other plant medicines like ayahuasca, peyote or psilocybin (magic mushrooms) and is therefore still relatively unknown.

Coupled with the lack of mind-altering effects, this means that kambo has not been made illegal in most countries, with two exceptions:

While the usage of kambo is not explicitly against the law in most other countries, its application falls within a grey area, causing many kambo enthusiasts and retreat centers to be very intentional with their ceremonies.

Kambo Safety and Side Effects

We know little about the long-term safety of kambo use. While the International Association of Kambo Practitioners claim that "kambo is 100 percent safe in the right hands," there are cases where people suffer from adverse effects and even death.

Although the number of deaths or hospitalizations associated with kambo use is very small, in most cases, adverse reactions to the medicine are often related to underlying medical conditions.

According to a 2017 study published in Clinical and Experimental Hepatology, "the most common causes of illness and death after kambo rituals are associated with the depressive impact of derivatives of opioids on the CNS and the effects of toxins on the cardiovascular system[*]."

DILI (drug-induced liver injury) is a potential side effect of kambo use. Researchers believe that "there is a high probability that in the secretion of Phyllomedusa bicolor, there are toxins that can damage the liver."

While kambo is relatively safe when applied to healthy individuals, some do experience side effects. Immediately during and after a ceremony, some may experience muscle cramps, swelling, or a strong emotional reaction.

For the vast majority of people, these effects are short-lived and tend to dissipate in the hours proceeding the ceremony.

How Often Can You Participate in Kambo Ceremonies?

As with many substances, the prolonged use of kambo within a short time frame will result in a tolerance build-up.

No definitive data exists as of yet regarding how often it's safe to partake, but 12 sessions per year is widely accepted by many to be a safe limit.

Many of those who work with kambo will often partake in several ceremonies back to back in an attempt to cleanse deeper, where three sessions in a row are common. Such protocols are commonplace in the lead up to other medicine ceremonies such as ayahuasca, where kambo "clears out" existing blockages to enable deeper journeying in subsequent days.

How To Prepare for a Kambo Ceremony

In preparation for a ceremony, the "cleaner" you arrive, the better. At the very least, it's essential to be in a fasted state.

Kambo ceremonies are often carried out in the morning and require participants to have fasted for at least 12 hours and have refrained from alcohol for 24-48 hours before application. It's also important to avoid the ingestion of any fluids in the 2 hours leading up to the ceremony. Water provides lubrication for the purge, and participants drink 1.5 - 2 liters of water in the minutes before administration of the kambo.

In guided ceremonies, most guides will have you test a small amount of the medicine before commencing the ceremony as some people can suffer from an adverse reaction to the venom. Any practitioner who is IAKP certified will know how to navigate this process.

As with any plant medicine, it's essential to arrive in a relaxed state of mind with a firm intention.

A willingness to stay with the medicine no matter how unpleasant the effects will often lead to a more thorough cleanse.

Many people give in to the temptation of lying down as the effects begin to wear off. However, by sitting upright, consuming more water, and even introducing other medicines such as rapé, the purge often continues, and many report deeper cleansing as a result.

How Much Does Kambo Treatment Cost?

The cost of kambo varies considerably depending on where you are in the world. In places like the Amazon Basin, where frog medicine is widely available, costs are significantly cheaper than in the west.

Any practitioner certified by the IAKP is free to decide upon their own rates. Rates will depend upon the experience, expertise, location of the practitioner, and whether or not it’s a group or private session. Therefore, rates can vary widely. IAKP actively discourages any of its trained practitioners from excessive charging.

The IAKP provides a list of registered practitioners on their site with additional info and contact details for pricing.

What Plant Medicines Does Kambo Pair With?

Kambo is often taken with many other plant medicines, most of which produce psychedelic effects. The most common pairings include:

In the Amazon, the use of traditional medicines among indigenous societies targets the lifting of Panema—that dark cloud of negative energy that surrounds a person's aura.

Kambo aids in the clearing of this dark energy and thus opens the way for a deeper connection with other medicines in the hours or days following application.

When used before an ayahuasca ceremony, kambo helps advance the purging. This means that ayahuasca experiences often involve less nausea, something that often enables it to work at a much deeper level.

Few can imagine the medicinal benefit of applying the venomous skin secretions of a nocturnal frog onto burned skin. But the powers of this frog poison are thought to be quite remarkable.

For the indigenous people of the Amazon, medicine doesn't come in a pill, and such forms of medicine are all they know.

As for us in the west, these medicines serve to show us that nature often knows best; that effective medicine is often hidden in plain sight right in front of our eyes if we choose to seek.